A rapidly expanding company has moved into a unique building in Lincoln to accommodate its growth and high-spec tech requirements.

Since 2019, research and development business SRC UK has grown from 1 employee to 30 and the company is looking to double in size again by the end of the year. Its core business is with the Ministry of Defence, providing analytical software, big data analytics, consultancy and training.

SRC UK was initially based in the Boole Technology Centre at Lincoln Science & Innovation Park but this month moved into the Gravity R&D building part of the Park’s second phase of expansion. This specially designed facility, part funded by the Greater Lincolnshire LEP and the Midlands Engine, was developed for firms like SRC UK. 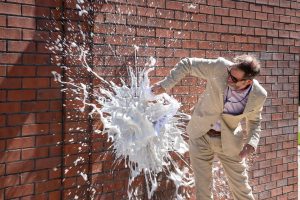 “The Gravity Building gives us enough space to grow into,” says Steve Davies, SRC UK’s managing director. “And its sophisticated design is ideal to our needs.” This means that SRC UK can run its own software and produce its own data within the building on a unique cloud-based system as well as provide innovative space for other local companies to use.

Steve, worked in the RAF as a Weapons Systems Officer for 36 years and was retiring just as the opportunity to set up the UK division of US-based research and development company SRC Inc came up.  “I was in the right place at the right time with the core skill set that they needed,” says Steve. “Since then, everybody who has joined has played a vital role to get us to where we are today so quickly.”

“Our ethos is centred around collaboration; whether that be creating a new way of working with other companies, the unique way we build the company around graduates or building new products based on our people’s ideas.”

The company has broken the mould with how the government works with graduates in the sensitive area of big data analytics. “Initially, the government would only work with people with decades of experience in this niche area. We take STEM graduates with a sound educational background and layer on targeted training so they have specific experience and skills and they evolve into the job that suits that individual the most.”  This blended approach has led to SRC UK being the first company in the UK to have early career graduates supporting MOD data production.

SRC UK is a not-for-profit company committed to making a positive impact on the city and county. It aims to employ locally, including graduates from the University of Lincoln, collaborate with local businesses and to use local resources. SRC UK, which is a disability confident employer, has signed up to the Lincoln Social Responsibility Charter and supports charities such as the Give an Hour scheme where staff volunteer in local schools, the C2C2C charity bike ride around Lincolnshire and Lincoln food banks.

“We see ourselves as a responsible company which is very keen on generating revenue and jobs for Lincoln and being part of the Science Park’s community and its continuing expansion,” says Steve.

Just click here to subscribe and in the meantime may I wish you the very best.
Previous articleSleaford motorcyclist who had leg amputated following crash continues to defy expectations
Next articleCourier Fraudsters target Boston couple for £6,000 savings
Advertisment

Cyclists will soon be able to travel safely between key facilities in Scunthorpe, thanks to a huge injection of levelling-up cash. More than £100,000 of...

Lincolnshire County Council has voted to spend a further £5m of revenue on much needed road maintenance. The money comes from council areas that have...

Next spring social landlord Lincolnshire Housing Partnership will move its Grimsby base to Cartergate House, on Chantry Lane in the town. The housing association previously...

Residential land specialist Terra has submitted a hybrid planning application for a mixed-use scheme of up to 320 new homes and a care home...

Whilst we all know that spending too much time in the sun can cause issues such as skin cancer, sunburn and premature ageing, there...