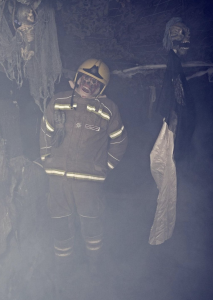 Hundreds of visitors braved the weather to attend the event, where they discovered live actors throughout the station to add to the drama. Visitors seemed surprised and delighted with the amount of effort put into the event and clearly no stone was left unturned as could be seen from the eight foot yeti , the skeletal remains of a firefighter -still suited and booted, a chainsaw wielding Freddy Krueger, a nightmarish nun and creepy clown to name but a few (or should we say phew). 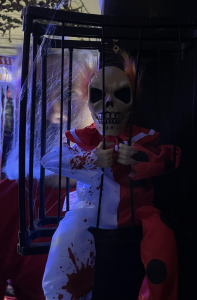 The fire station itself was converted into a ghost train type adventure land with cleverly constructed tunnels, concealing more goulish goings on accompanied by eery soundtracks adding to the drama.

Thanks to the generosity of guests some £380 was raised on the evening  for The Fire Fighters Charity with further pledges been made since via social media.

Just click here to subscribe and in the meantime may I wish you the very best.
Previous articleAward winning lincolnshire vineyard and winery up for sale
Next articleLincolnshire to lose several McColl’s stores after Morrisons’ closure decision
Advertisment

Interested in fostering? Would you like to learn more about becoming a foster carer? Come along to Lincolnshire Fostering Services' next virtual information event on Tuesday 28th...

Lincolnshire cattery reaches for the stars with new ownership

An animal-loving couple with 25 years’ pet industry experience gained in both the UK and USA, have bought Axholme Cattery at Crowle in Lincolnshire. The...

Boston gets £2.6m to enhance the quality of life in the borough

Businesses and communities in Boston will benefit from £2.62million of funding secured by the Borough Council to deliver projects and programmes to build pride...

The planning application for a new market hall, a cinema and other leisure facilities at the Western end of Freshney Place in Grimsby has been...

Life in parts of Lincolnshire is being enhanced thanks to young lives being turned around with the help of funds from Freemasons which support...