Lincolnshire local Andy French sadly passed away in July 2017 from a rare condition called sporadic CJD, aged 52. Though he was born in Dartford, he moved to Caistor almost 14 years ago. This is the inspiration that led his family to organise a heartfelt charity bike ride, in Andy’s honour, from Kent to Caistor.

On the 31st May, 21 people set off from The Bull Pub, Horton Kirby, Kent to cycle 230 miles over three days. The first day saw the group travel over 90 miles, stopping in Cambridge, then cycle over 70 miles the next day, stopping in Sleaford, before doing the last 66 miles to arrive in Caistor on Saturday 2nd June.

Most of them had not picked up a bike since childhood but were determined to complete the epic task ahead of them.

The riders included Andy’s brother-in-law, Danny Goldsbrough, who is landlord at The Bull; Andy’s sister-in-law, Jayne Goldsbrough; Andy’s niece, Jenna Rickner; five friends from the Caistor and Market Rasen area (three of whom are managers for Caistor Tennyson Tigers junior football teams, which Andy helped run before he was ill); and 13 locals from The Bull.

Andy’s illness, CJD, is a rare degenerative brain disorder and is always fatal. It has been described as dementia on speed. Due to its rarity, it is extremely hard to get a correct diagnosis, as was the case with Andy. His family sadly saw him deteriorate rapidly with no explanation – a truly heartbreaking situation, especially after learning that there is a nasal test that can identify CJD, which would have meant him not having to endure all the tests he did.

There is now a drug that has been the pipeline for around six years, PRN100, which has proof of working but faced challenges ahead before it could be used for human trials. The Cure CJD campaign was launched in 2016 by a group of volunteers who had been personally affected by CJD to raise funds solely for the progression of this drug. To date, the amount raised stands at over £213,000. This has enabled the drug to move forward significantly. 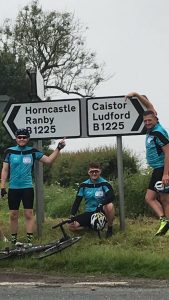 Andy’s family, after raising £5,000 for St. Andrew’s Hospice in Grimsby as a thank you for taking care of Andy in his final weeks, wanted to focus on raising money for something that could hopefully make a difference to the next unsuspecting victims of this most horrid disease.

They found Cure CJD and chose it given it’s potential to not cure the disease, but stop it’s progression. Since October 2017, the family have helped raise over £25,000 for the Cure CJD Campaign. The bike ride alone raised over £12,000 of this, and is still rising. Due to the seriousness of the condition and the trouble doctors have in diagnosing the condition, donations like these are vital in the battle for helping treat CJD.

With the Covid-19 lockdown having a major impact on our industry as a whole, the advertising revenues we normally receive, which helps us cover the cost of our journalists and this website, have been drastically affected.

Just click here to subscribe and in the meantime may I wish you the very best.
Previous articleGroup sentenced for stealing 15 King Charles Spaniels
Next articleCross-border operation sees 7 vehicles stopped for traffic offences in one day
Advertisment

The Greater Lincolnshire LEP has received a £25.8 million cash boost from the Government to fund ‘shovel-ready’ projects to help the local economy and...
Read more

Scunthorpe’s Church Square to be transformed into urban park

Church Square in Scunthorpe’s High Street will undergo a dramatic redevelopment as North Lincolnshire Council is to create an urban park at the centre...
Read more

Lincoln Christmas Market 2020 has been cancelled due to the ongoing threat of the UK’s coronavirus crisis. City of Lincoln Council has made the difficult...
Read more

After an eight-week delay due to COVID-19, Boston’s new skate park is finally underway. This is the start of phase two of the development in...
Read more

Many Lincolnshire libraries set to reopen next week

The sites will open in line with government guidance and will have a number of safety measures in place, including entry on a one-in-one-out...
Read more