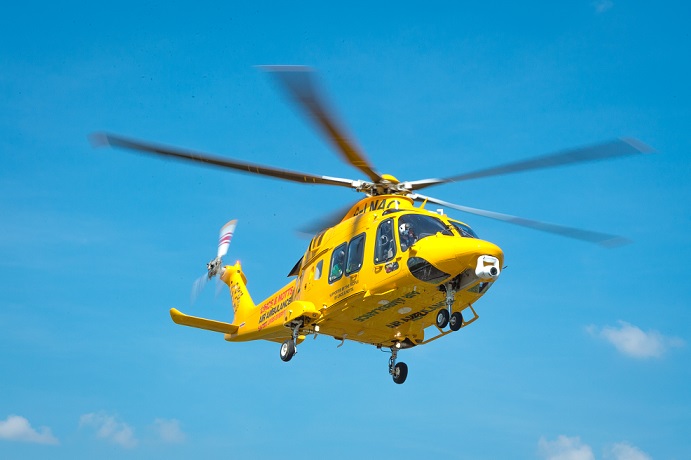 The Lincs & Notts Air Ambulance has reached a significant milestone after flying their 20,000th mission on Sunday, just hours before celebrating the Charity’s official 25th birthday.

The Ambucopter and crew were called to a medical emergency on Sunday 12th May in Costhorpe near Worksop at 6.30pm, their 5th mission of that day.

The helicopter covered the 28-mile journey in just 13 minutes; the Charity’s on-duty clinical team were then on scene to provide vital pre-hospital care to the patient. The crew arrived back at base shortly after 7.30pm.

This week marks the Charity’s 25th Anniversary, with the crew airlifting their very first patient on May 13, 1994. Today, the Lincs & Notts Air Ambulance provides a high-quality Helicopter Emergency Medical Service, able to deliver advanced clinical procedures, including roadside open chest surgery, anaesthesia and blood transfusions directly at the scene of an incident.

To mark the Charity’s silver anniversary, the Lincs & Notts Air Ambulance hosted a celebratory event on Monday 13th May for special guests at the Fire and Rescue Training Ground in Waddington. The event was attended by Charity ambassadors, clinical crew, Trustees and former patients who have been helped by the service over the last 25 years.

Roger Linnell, a paramedic at Lincs & Notts Air Ambulance, said: “I am extremely proud to have played a part in this pivotal moment for the Charity. It’s mind-blowing knowing that we have been called to 20,000 missions over the last 25 years.

“There really is nothing more satisfying than having the opportunity to make such a positive impact on so many people’s lives, on what is typically the worst day they will ever experience. Having met many of the patients we have tended to, it’s so humbling to hear how they’ve overcome their ordeals and now want to give something back to help support our Charity.”

Throughout their 25th Anniversary year, the Lincs & Notts Air Ambulance will be working towards providing a 24-hour service 7 days a week, enabling them to give more people that ever before the very best chance of survival.

“Moving towards 24/7 operations will allow our critical care team to provide enhanced care to our patients around the clock, meaning we will be able to help even more people across Lincolnshire and Nottinghamshire.”

The Lincs & Notts Air Ambulance receives no direct Government funding, meaning they rely solely on the support of the local community to raise the funds they need to keep their helicopter flying. Each potentially life-saving mission the crew are called out to costs approximately £2,500.

“This is one of many landmarks for us this year, and we are incredibly grateful for the wonderful support we have received from our community, businesses and groups who help to keep our Ambucopter flying. Without their generosity, we would not have been able to make such a significant difference to so many people’s lives.

“While difficult to celebrate the fact that 20,000 people have needed our care, it is incredible that through the support of the community we have been able to fund so many missions. We are truly humbled to have helped so many patients over the last 25 years, and we look forward to providing the very best pre-hospital care to the people of Lincolnshire and Nottinghamshire for many years to come.”