The New Theatre Royal Lincoln (NTR) have announced their largest celebrity cast to date for their upcoming Christmas pantomime, Cinderella, which will run from Tuesday 6th December 2022 – Sunday 8th January 2023.

Home to Lincoln’s longest running traditional Christmas pantomime, the theatre are proud to welcome back TV personality Kerry Katona as Ugly Sister Botox. Kerry garnered national attention in pop group Atomic Kitten from 1999. Since then, she was the focal point of three MTV reality shows, was crowned Queen of the Jungle on ITV’s I’m A Celebrity… Get Me Out of Here! (2004), finished runner-up on Celebrity Big Brother (2011), and competed on Celebrity SAS: Who Dares Wins (2021). She also proved popular with Lincoln audiences when she appeared in NTR’s 2016 Christmas pantomime, Cinderella as the Fairy Godmother.

Ahead of her return, Kerry said: “I am super excited to be back at the beautiful New Theatre Royal Lincoln. It was the place where I did my very first panto, and I am utterly grateful to be returning. I can’t wait to see the crowds again, and for everyone to see the show. And I’m doing it with my daughter too, which will be amazing!”

The role of the Fairy Godfather will be split between two recognisable faces. From 6th – 24th December, the role will be performed by Scunthorpe’s Jake Quickenden. After proving a hit with audiences as Flash Hugo in NTR’s Beauty & the Beast pantomime last year, Jake said: “I’m so excited to be back in Lincoln. Last year was amazing and the crowds were incredible. It’s one big family at the theatre too, so when the opportunity came round to perform in Lincoln again, I jumped straight on it, it feels like my hometown, and I can’t wait to get started.”

From 26th December – 8th January, the role will be performed by Strictly Come Dancing legend, Ian Waite. Ian performed on the BBC show for eight series, and subsequently went on to feature on It Takes Two (BBC Two) with his own popular segment ‘Waite’s Warm Up’. He also toured alongside fellow Strictly professional Vincent Simone in The Ballroom Boys and The Ballroom Boys ACT 2, both of which visited the NTR. Ahead of the pantomime Ian said: “I’ve performed at the New Theatre Royal Lincoln several times over the years, and the audiences have always been wonderful. So, I can’t wait to see everyone again when I ‘Cha-Cha’ my way onto the stage this festive season.”

Joining the celebrity-lined cast will be comedian Patrick Monahan, as Buttons. Patrick has toured stand up shows across the globe, he featured on TV’s Pointless Comedians (BBC One, 2020), and was the winner of ITV’s Show Me The Funny (2011). On stage, he starred in Darlington Hippodrome’s 2021 Christmas pantomime Cinderella, and is a popular compère at NTR’s In-House Comedy Night at the Royal productions.

Making her NTR debut as Baby Botox is Lilly McFadden, daughter of Kerry Katona and Brian McFadden. Lilly has been in the public spotlight since she was a baby, has guest starred on Loose Women, and won E4’s Celebrity Ghost Trip (2021) alongside Kerry.

But that’s not the only family affair. NTR’s artistic director, Natalie Hayes-Cowley will star as Ugly Sister Filler, with daughters Georgia and Charlotte featuring as Cinderella and Baby Filler, respectively.

Raised in Lincoln, Georgia Hayes-Cowley has previously taken to the NTR stage as The Slave of the Ring in Aladdin (2017), The Tin Woman in The Wizard of Oz (2019), Mindy Singit Sister in Beauty & the Beast (2021), and Raksha in The Jungle Book (2022). Whilst Charlotte Hayes-Cowley starred in Robin Hood (2019) as Fairy Stardust.

Natalie Hayes-Cowley, who is also the show’s writer and producer, has finally chosen to return to the stage after a six-year break from performing, since taking the reins at the theatre in 2016 with her husband. Talking ahead of the show, she said: “It feels strange to be performing instead of directing this year, but I can’t wait.

“I love creating shows and I’m proud that we have produced 30 In-House Productions here at the theatre since 2016, but I’ve missed performing and wanted to scratch that itch this year. And Cinderella will be all the more special as I’ll be performing alongside my two daughters, something I haven’t done since 2011 when they performed with me in a Christmas Carol here at the theatre, and I know Kerry is equally thrilled to be performing with Lilly too.

“We would also like to thank everyone that came see Beauty & the Beast last year. We were beyond grateful for all the support, especially after the show was cancelled the year before because of the pandemic. Because of our patrons’ support, it was the highest grossing pantomime in the venue’s history, which is huge because we have been able to re-invest that money into the upkeep of our theatre. But we’re not resting on our laurels, we’re back with our biggest celebrity cast to date and we’re raising the bar higher again. This show will be an absolute belter with something for everyone, young and old!”

Wrapping up the cast are Arran Wilson as the Wicked Stepmother, who starred as Bagheera in NTR’s The Jungle Book (2022), and Jack Barnard as Prince Charming and Dan Badrick as Dandini, who are both new to the NTR stage.

Don’t miss the Fairy Godmother of all Pantomimes this festive season at Lincoln’s treasured Victorian theatre. Tickets on sale now. 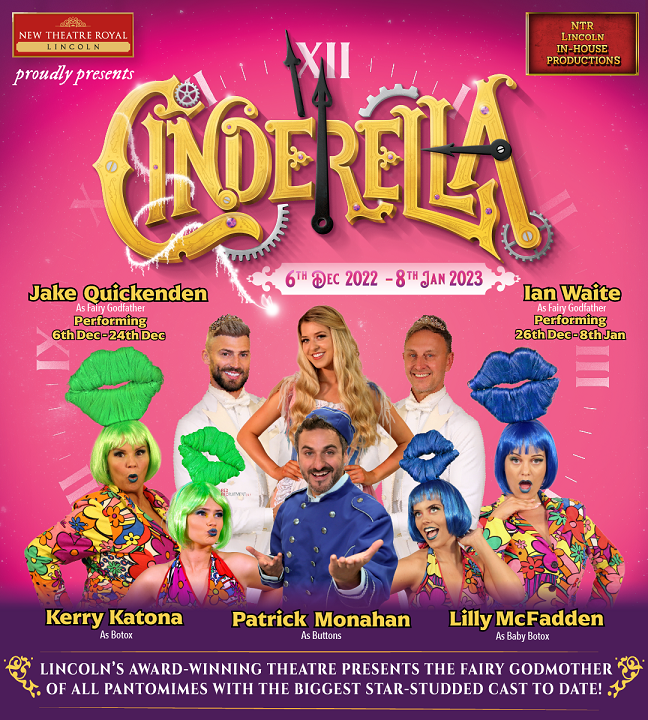 Just click here to subscribe and in the meantime may I wish you the very best.
Previous articleExhibition celebrating Lincolnshire’s coastal pubs arrives in Skegness
Next articleClassic Ibiza wows capacity crowd on Burghley House return
Advertisment

Could you help shape and support the life of a young person? If so, North Lincolnshire Council need you and your skills to help...

An opportunity to create the housing development on the former Western School site has been released to tender this week. The 22.9 acre brownfield site...