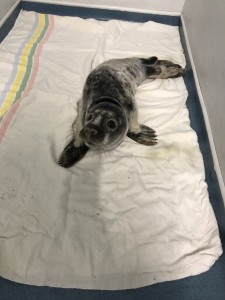 The RSPCA has rescued a seal pup who managed to find his way to Tattershall Castle in Lincoln.

It’s thought the young grey seal had come down the weir and climbed up the bank before trying to get into a small dyke.

He was spotted by a family walking their dogs on Boxing Day, and they called the RSPCA.

RSPCA inspector Kate Burris said: “It was definitely unexpected to be contacted about a seal pup at Tattershall Castle! The people who spotted him and called us couldn’t believe what they were seeing.

“The poor pup was trying to get into a small dyke when they noticed him. We think he had come down the weir and climbed up the bank. He’s a male grey seal and aged around three weeks old.”

He was taken to a vet practice overnight before being transferred to specialist facilities at RSPCA East Winch Wildlife Centre in Norfolk on Friday (27 December).

Their theme for this seal season is fairground attractions and he has been named Zodiac after a ride at Thorpe Park!

Kate said: “He came in very underweight at just 14kg which is a long way short of the 40kg he needs to be for him to be returned to the wild.

“The staff who are caring for him though say he’s doing really well. He’s very feisty – which is a good thing – and has been on fish soup until a couple of days ago when he started on whole fish.