Spectacle of fire and light draws thousands of visitors to Gainsborough

Smiles lit up the faces of people of all ages as they soaked up the atmosphere of this year’s illuminate event to commemorate the 400th anniversary of the Mayflower story.

Fire dancers and musicians welcomed visitors as they strolled through the grounds of All Saints Parish Church, taking in all the colourful elements of the first fire garden display to take place in the town centre.

Those attending could then walk among the Illuminated performers towards Gainsborough Old Hall, where projections of a wonderful film, produced by local production company Electric Egg with the help of Dr Anna Scott, telling the story of the Mayflower, was beamed onto the outside of the historic manor house.

As people clapped the end of each film showing, they then wondered around the grounds of the Old Hall taking pictures with the performers, toasting their own marshmallows over a fire pit, and tucking into some hot food.

People were also frantically texting their friends to encourage them to join which many described as a ‘standout’ event for the town.

Over 2000 people entered the grounds of All Saints Church to see the fire garden – with the overall mood and reaction being that the event was a stand-out occasion for the town. 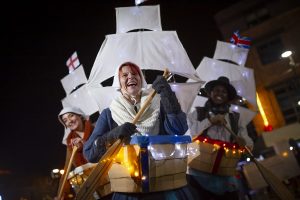 Speaking at the event, Chairman and Cllr Steve England, said: “We are extremely pleased to be able to hold our final event in a form not too dissimilar from what we originally planned back in 2019, given the challenging circumstances over the past year.

“The commemorations for the Mayflower 400th anniversary have been taking shape since 2019, and it is fantastic that we have been able to deliver a programme of events which has adapted to the circumstances and changes we have all had to make in our lives. I’d like to thank everybody who has contributed to make this event in particular so special.

“I’d also like to mention how grateful we are to Arts Council England for their support, as well as the support we have received from Lincolnshire County Council and Gainsborough Town Council.” 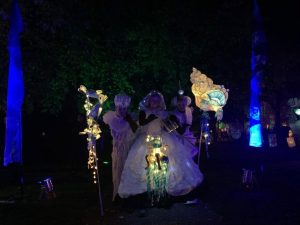 Lucille Middleton and her husband Cliff attended the event from their home in Morton.

Lucille said: “I think this is absolutely fantastic to see the projection on the Old Hall, then to walk around the church grounds for the fire garden. It was good to see so many people at the event. We have never seen anything like it before and the stilt walkers were outstanding.”

Alan Robinson attended the event with his daughter Lizzie. He said: “It is a really good event to attract tourism. It is so nice to see everyone out together with their families.”

Vikki Wain and her son Ernie (7) toasted marshmallows in the grounds of the Old Hall as they soaked up the atmosphere from the illuminations.

Vikki said: “It is a fantastic event. It is good to have something like this in the town and to see so many people enjoying it.”

Ann Addy, from Gainsborough, praised the team who organised the event. She said: “It has been amazing. Well done to the team, we are so grateful for all the planning that has been put into making this event happen. It really has put Gainsborough on the map.”

Kathleen Parker, also from Gainsborough, was delighted to see crowds of people at the event.

She said: “There was such a buzz and it was so lovely to see so many families about. What we are celebrating is something that happened 400 years ago when a small group of everyday people gave us freedom to choose whether to go to church or not. As a practicing Christian, we hope there will be another new revival here in Gainsborough.”

Holly Popplett attended the event with her husband, Graham and their two daughters Daisy and Scarlett.

Holly said: “It is the first time we have been here and it is really good. The fire garden is amazing.”

Graham added: “It was a really interesting projection and such a lovely way to project it on to the Old Hall.”

Daisy (7) and Scarlett (6) and their friend Theadora Williams-Holden (6) all made lanterns at school, specifically for the event.

Describing how she made her lantern, Daisy said: “We cut out squares of tissue paper then put a pic around it, added gems and stars and put a candle inside. It was great.”

Her sister Scarlett added: “It has been fun – the fire garden has been really good.”

Theadora added: “I have enjoyed coming to the event with my friends and Iiked the tasted marshmallows and the fire garden.”

Just click here to subscribe and in the meantime may I wish you the very best.
Previous articleGrants of up to £30,000 available for North Lincolnshire community projects
Next articleEngagement ring trends throughout time
Advertisment

Litterers have been fined 1,846 times in the past year as part of North Lincolnshire Council’s crackdown on environmental crime. Enforcement officers have issued the...

The Omicron Hospitality and Leisure Grant (OHLG), aimed at supporting those businesses in the hospitality, leisure, and accommodation sectors most impacted by the COVID-19...

Win this brilliant bundle to bring birds to your garden

There's nothing quite like hearing the chirping of birds, watching them glide gracefully and flit about the garden. Lincolnshire Today is therefore delighted to be...

Two play areas have been refurbished after developers chipped in thousands of pounds as part of the planning process. Local councillors, South Kesteven District Council...