Star-packed cast head to Lincoln for Beauty & the Beast

A star-packed cast is heading to the New Theatre Royal Lincoln for their Christmas pantomime Beauty & the Beast, running from Tuesday 7th December 2021 – Sunday 9th January 2022.

Due to the pandemic, pantomimes up and down the country were unable to go ahead in 2020. But Lincoln’s longest running traditional pantomime is back this Christmas, with their largest ever cast including the popular Jake Quickenden. Jake will star as baddie Flash Hugo, an arrogant, self-loving, egotistical, ladies’ man who will stop at nothing to win the hand of Belle.

Jake first broke onto our TV screens on The X Factor (2012), making it to the judges’ houses, before reaching the live shows in 2014. Since then, alongside releasing music, Jake has become a household name after finishing runner-up in I’m A Celebrity Get Me Out Of Here (2014), and being crowned the winner of Dancing On Ice (2018).

He has also become a regular guest and co-presenter on TV shows including ITV’s Lorraine, Loose Women, and Big Brother’s Bit On The Side, whilst appearing on Hollyoaks, The Full Monty (On Ice), MTV’s Celebrity Bumps, and most recently Channel 4’s SAS: Who Dares Wins.

Jake’s theatre credits include Peter Pan a Musical Adventure at Blackpool Opera House (2017), the nationwide tour of Hair the Musical (2019), and host of Dance to the Music, starring Kristina Rihanoff, which visited the New Theatre Royal (NTR) in 2020. He has also recently been announced as ‘Willard’ in the upcoming 2022 UK Tour of Footloose.

Jake will be joined by NTR audience favourite Chris Johnson, as Belle’s father – Professor Ivar Brainstorm. Chris, CBBC’s ‘Yonko’, presented on the CBBC Channel from 2010 – 2016, and voiced Dennis the Menace in Dennis the Menace and Gnasher (2013).

He is the host of podcasts Out of the Broom Cupboard and #BigDamnCast and has appeared in every Christmas and Easter pantomime at the New Theatre Royal since Cinderella in 2016.

Ahead of his return Chris said: “I’m delighted to be heading back to my beloved New Theatre Royal. I can’t wait to get my kooky inventor on! See you all at Christmas – panto’s back, baby!”

Returning by popular demand, Zoe Hanna May will play the role of Belle. Zoe appeared on ITV’s The Voice (2017), securing a place on Tom Jones’ team, and wowed audiences as Maid Marian in the NTR’s Christmas pantomime Robin Hood (2019). Zoe also recently starred as a vocalist in the NTR’s socially-distanced production, Strictly Cabaret X.

Another familiar face taking to the stage is Christian Lee, as Marcel Allumette – the quirky candelabra. An award-wining comedian, actor, and magician, Christian reached the live finals of Britain’s Got Talent (2016), whilst also appearing on Sky TV’s Max Magic, BBC’s The Slammer, and Harry Hill’s TV Burp. He is no stranger to Lincoln either after visiting NTR last year in An Evening of Burlesque.

James de Lauch Hay will also be returning to Lincoln after starring in the plays Right Place! Wrong Time! (2019), and The Cinder Path (2020), whilst Camilia O’Grady, Vanessa Dumatey, and Laura Wenton will be making their NTR debuts.

Beauty & the Beast follows NTR’s successful 2019 Christmas pantomime Robin Hood, which was one of only five productions nominated for ‘Best Show’ (under 750 seats) at The Great British Pantomime Awards 2020. Just like Robin Hood, this year’s pantomime will be packed full of laughs, boos, and audience participation, making it perfect fun for all the family.

When asked about Beauty & the Beast, NTR’s Artistic Director and the show’s Producer, Writer, and Director Natalie Hayes-Cowley said: “As with all our pantomimes I like to bring something a little different that audiences won’t expect, and this year is no exception. We set the bar high with Robin Hood and this year we hope to raise it again.

“You can expect to see this beautiful story come to life on stage thanks to a huge multi-talented cast, with fabulous dance routines, incredible singers performing cult classic songs, along with the classic comedy, fun, and games you would expect – with an extra touch of MAGIC! This enchanting tale as old as time has something for everyone young and old.” 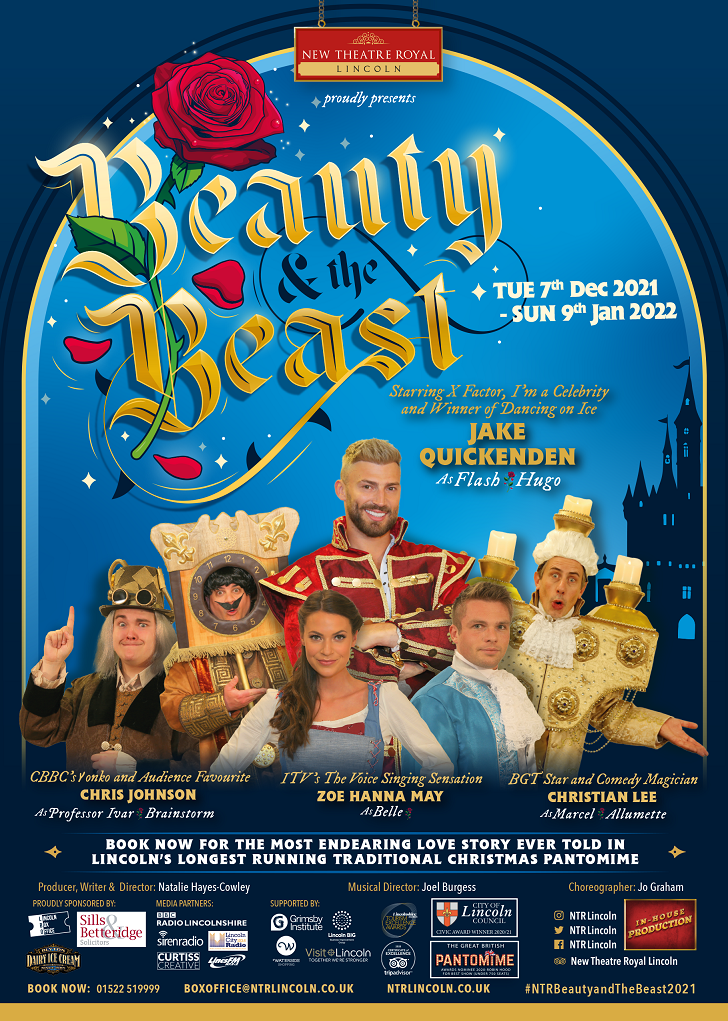 Just click here to subscribe and in the meantime may I wish you the very best.
Previous articleBoston Christmas Market and Light Switch on
Next articleGigabit full fibre broadband arriving at ‘light speed’ in Market Deeping
Advertisment

After a trying year for adults and children alike – whether struggling with remote working or weathering mock exams after learning from home –...

The countdown to Christmas has started, and National Trust’s beautiful Belton House in Lincolnshire is getting ready to welcome its glittering Illuminated Trail back...

The Grove Care Home in Waltham near Grimsby is delighted to share the news that a member of their care team has been shortlisted...

The Mayor of North East Lincolnshire has handed over a cheque for £1,560 to St Andrew’s Hospice after he jumped 15,000 feet from a...