Step inside this contemporary masterpiece

Nestled into the hillside, close to the heart of Stamford, Holwell is an ultra-modern masterpiece, built to make real its owner’s dreams of their “forever home.”

Set on a large plot and presenting three floors of contemporary living, the five-bedroom property offers light and open spaces that are well connected to the outside. Simon and Gemma moved into the house following its completion after Simon’s company, Forest Homes, constructed it.

Sitting behind a stone wall, and approached through automatic sliding gates in a car or an arched door as a pedestrian, the house, which has a rendered exterior highlighted by smooth ashlar friezes, seems to be a single-story building from street level, but this hides the true extent of the home.

While there is first floor accommodation in the eaves, this upper ground level leads to an expansive lower ground level which connects through sliding glass doors onto a sheltered and private sunken terrace. 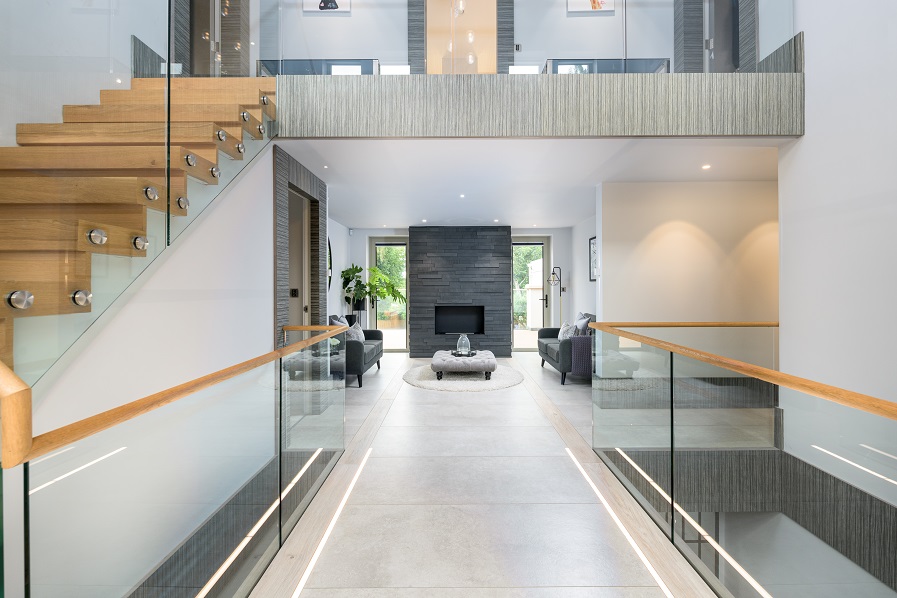 When initially stepping into the home, one is greeted by an impressive entrance hall, with a distinctive, grey striped, timber veneer along skirtings and architraves. The stairs here have oak treads and glass balustrades. Ahead is a slate-clad chimney breast leading onto the decked balcony which reaches across almost the entire width of the house.

On this level the master bedroom suite can also be found, with a vanity area, a separate dressing room, and a large en suite featuring a bath and a walk-in shower. French doors open onto the balcony from the bedroom, while another pair leads onto this from the family bathroom, which is opposite a further bedroom. The decked balcony boasts an external chimney where a fire can be lit for a cosy evening of entertaining. 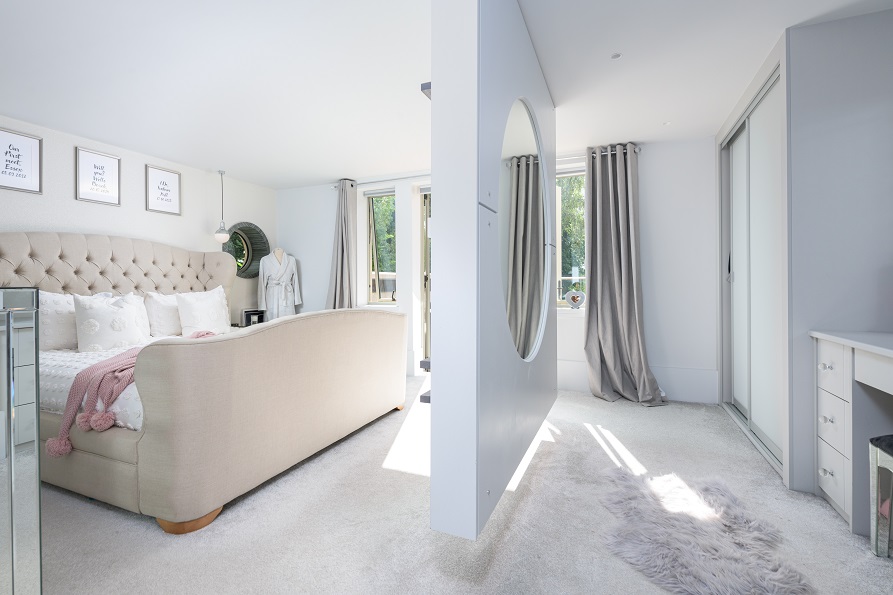 Moving to the lower ground floor, one will discover Simon’s favourite space in the house, an almost fifty-foot-long room with a fitted kitchen at the far end and a wall of glazing onto the garden. A double-sided, glass, log-effect gas fire, lit by a remote, is a central focal point and a delightful backdrop when dining, and from the above wall a television screen can be viewed from the kitchen. A bigger screen at the opposite end of the room meanwhile presents a cinema-style space where the family enjoys relaxing. 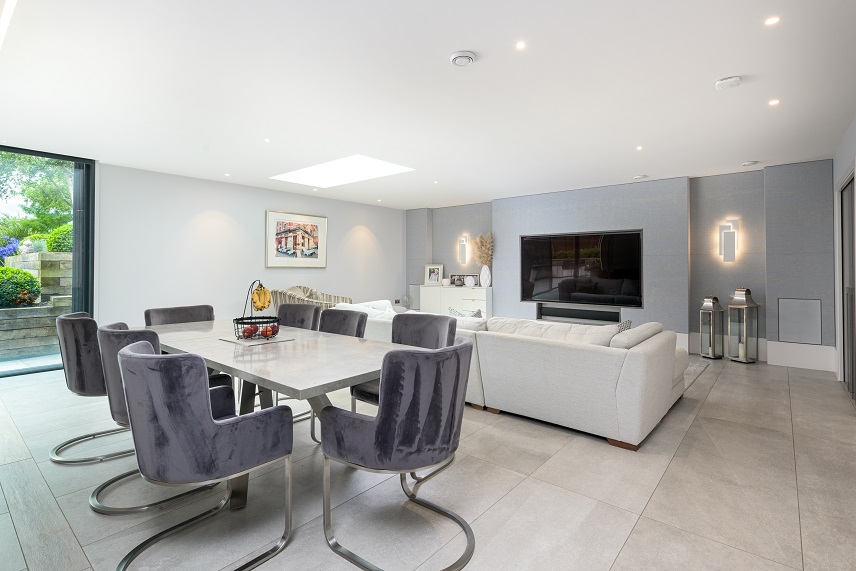 The kitchen is lined with modern units incorporating Wulf appliances, including eye-level ovens, a red and white wine cooler/cabinet, a fridge freezer, and a large island and breakfast bar, with a wraparound, Dekton worktop, that holds a dishwasher, an induction hob and a sink. There is also a sizeable walk-in larder and a utility area with more storage and another sink. 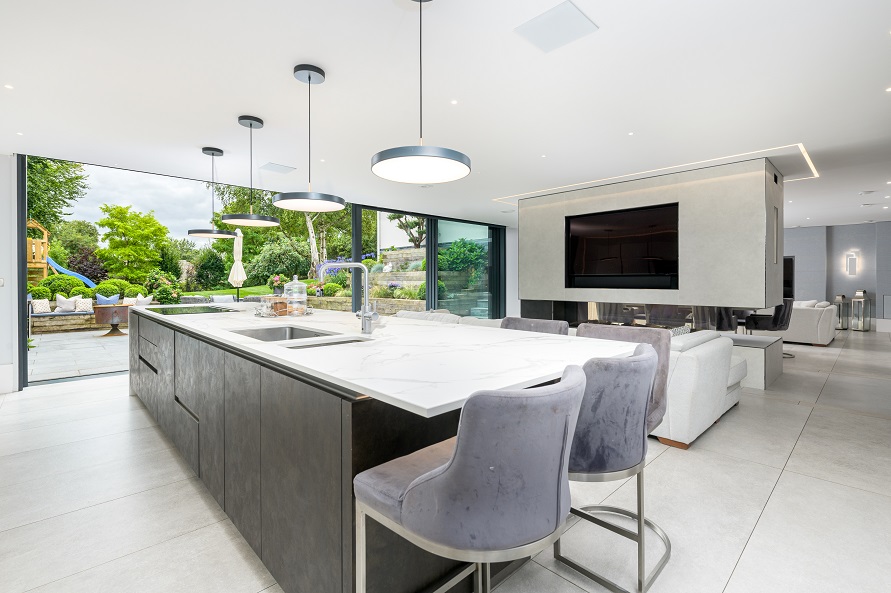 Behind the huge kitchen-dining-living room, is a room lined with cupboards currently used as a playroom. This could be made into a fifth bedroom however, especially as a shower room is on the other side of the ground floor lobby.

Modern tiling inside leads to paving outside through sliding doors, where an outdoor kitchen with Wulf barbecue, worktops, sink and serving areas awaits alongside built-in seating from oak sleepers that also retain the surrounding terraced flower beds. “The patio and outside cooking area is a really big space for family and friends to get together, have some food and enjoy a nice day or evening,” Simon noted. 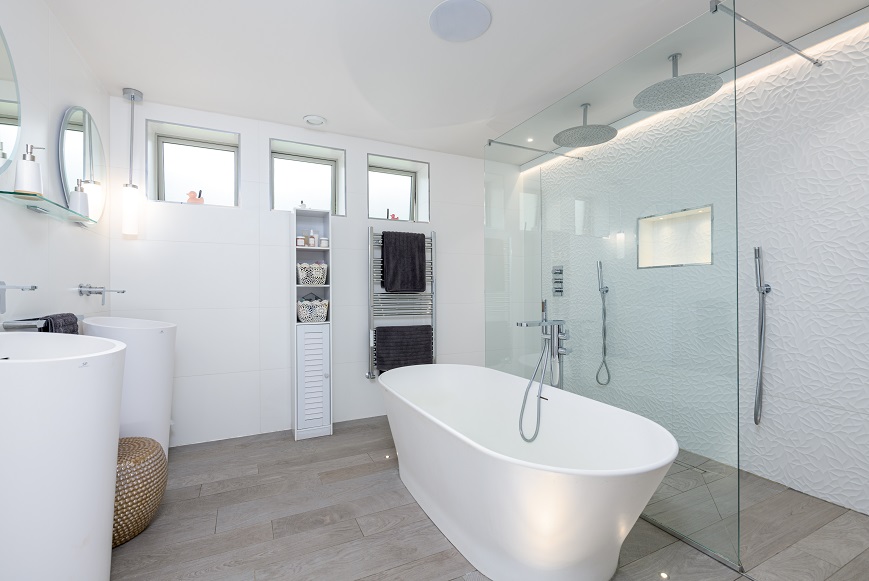 Travelling up to the top floor, there are two bedrooms with vaulted ceilings and dormer windows, and a bathroom in between, with a bath and a walk-in shower. The whole property also hosts underfloor gas heating, and a heat recovery system has been fitted whereby all the stale air is sucked out and clean, fresh air is pumped in via a filter system. A water softener is built-in too, as well as a sound system including speakers throughout the interior and external ones on the balcony. The property additionally boasts two double garages and ample off-road parking. 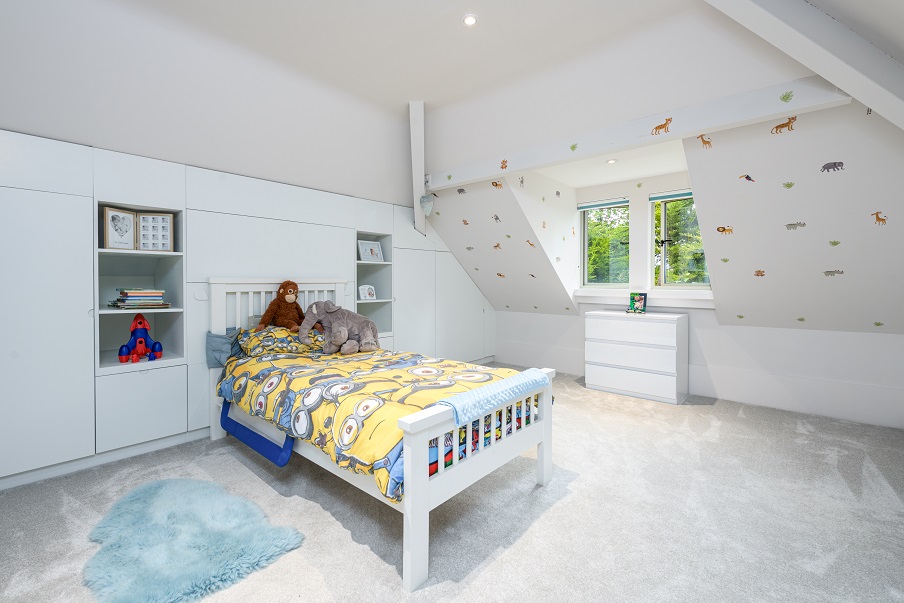 The private, peaceful garden is south facing, surrounded by walling and fencing, has been professionally landscaped, and provides entertaining areas as well as a lot of lawn, great for children who love playing outside. Visited by lots of birds, several mature trees can be seen in the garden, such as some silver birch, and beds stocked with perennials and evergreen shrubs.

Down the gentle hill is a further fenced and lawned area where there is a timber summerhouse, a greenhouse and some raised veg beds. Being on a lower level, the terrace and garden are perfectly quiet, with the three-story house acting as an ideal buffer from the rest of the world.

Despite creating their dream property, Simon and Gemma are now selling the “one off” home. “Another property has caught my eye, one that I had been looking at for quite some time. It has a lot of potential, so we are on to our next project,” Simon explained. Holwell is on the market for £2.5 million with Fine & Country – Stamford.

See this piece in full, here.

Just click here to subscribe and in the meantime may I wish you the very best.
Previous articleAdministrators appointed to Lincolnshire turbines business
Next articleEnjoy festive fun in Boston
Advertisment

The New Theatre Royal Lincoln are teaming up with Lincolnshire charity, EDAN Lincs Domestic Abuse Service, to give local families some Christmas magic this...

More than 20 arrests made in harecoursing crackdown

Lincolnshire Police's Rural Crime Team made 22 arrests in November as they continue to target hare coursers across the county. As well as making arrests,...

A man has been sentenced to life imprisonment following a "terrifying incident" where he wielded a knife in the streets of Immingham in September...

Blueprints revealed for improving travel and transport in Grantham, Sleaford, Skegness and Mablethorpe

Town centre improvements, better public transport and improved facilities for cyclists and pedestrians are all part of the new vision for transport in Grantham,...

Plans to exhibit a large collection of historical broadcast equipment and vehicles in Hemswell Cliff have moved a step closer thanks to West Lindsey...