Talking all things steampunk ahead of Asylum Steampunk Festival

Ahead of the eleventh annual Asylum Steampunk Festival taking place in Lincoln this bank holiday weekend, Lincolnshire Today sat down with successful steampunk YouTuber Joe Slatter (AKA The Dark Power) to chat about this thriving subculture.

Firstly – what exactly is steampunk?

That’s a question that’s very hard to answer actually as everybody in the community has their own certain spin on what steampunk is. The way I like to see it is that steampunk is almost like if the Victorian era hadn’t ended – you’d get the technological gadgetry we have today but it would be powered by steam as opposed to electricity. Steampunk itself is a very visual thing, so although most people don’t know the phrase, they can look at somebody dressed up and go “oh, that’s steampunk!”. Retro science-fiction is a phrase I’ve heard before when people are trying to pin down a definition too.

How did you first start getting involved with steampunk?

I started getting involved with steampunk through my brother Tom, actually. Several of Tom’s albums have a steampunk theme and we wanted to make a music video to accompany one of his songs, so I thought I’d help him out. I always knew what steampunk was, primarily from video games, but after that I really started to get involved with it myself. I’ve been a sculptor and model maker for 20 years and so that DIY element of steampunk really called out to me – it’s now become like a second job!

Your YouTube channel has grown into quite the success – how did you get there? 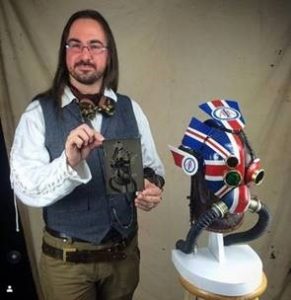 I first started my YouTube channel as a way to document my own progress with special effects and model making. Then as I got into steampunk it only seemed natural to start uploading YouTube videos about that as well. The more videos I put out the more viewers and subscribers I attracted, so it was really encouraging to watch it grow as I honed my craft. The maker community on YouTube is fantastic – it’s the ideal platform for likeminded people to connect and share their hobbies. The fact that you can post videos at whatever length you wish allows you to go into real depth, which is ideal for my YouTube channel, as many of the builds can be pretty complicated.

You have over 11,000 subscribers now, how did that make you feel personally and for steampunk as a hobby/trend?

I’m amazed I have so many subscribers on my YouTube channel, it’s such a vibrant community and the support on there is amazing. It’s a perfect opportunity to connect with people all over the world and share my passion for steampunk and other creative projects. I also learn a lot about different techniques on YouTube that I can bring into whatever I’m working on at that time. It’s also encouraging to know my YouTube channel can and is used to inspire people to make their own costumes and learn from the techniques I use. It’s an ideal multi-faceted platform for unique interests and hobbies.

How do you go about making those costumes?

I started out learning special effects at university. Although I’ve not worked much in that field professionally, a lot of the techniques I learned and use routinely in my sculpture projects (mould making for example) are useful here. I’ve also learnt a lot of new techniques from fellow steampunks such as metal work and leather work. I usually get an idea for a particular aspect of a costume, often from films, and then expand from there. This year I wanted to include lots of sculptures in my costume, so I’ve been making some ornate armour pieces.

The Asylum Steampunk Festival hits Lincoln this weekend – can you tell us a little bit about the festival and how Lincoln has become the unofficial capital of steampunk? 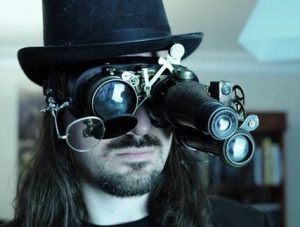 biggest festival of its kind. Think Glastonbury for steampunk! The costumes you see there are fantastic – people spend the whole year thinking about their costume and how they’re going to make it. The quality of costumes you see are second to none, the bar gets set higher and higher every year. A lot of people attending the festival walk through the city centre and the reception is always so positive.

What do you think attracts people to the festival?

I suppose you need to think about what attracts people to steampunk itself. At its heart the community is a group of creative people who love to push themselves and their craft. So much goes into making a steampunk costume – you’ve got to have an eye for detail, engineer the costume and an imagination! It’s a way of expressing yourself which is totally unique. I think that’s why steampunk continues to grow and hook people.

If you’d like to see steampunk firsthand, head up Steep Hill this bank holiday weekend. You won’t be disappointed.

Help us maintain our standards of journalism

Readers across the region enjoy our news site but keeping our news up to date and authoritative, without charging readers to view the site is a challenge. Especially now with the Corona Virus measures affecting us all, as many clients have been severely affected and are naturally reducing their spend on advertisements. Given this lack of revenue stream we are calling on the generosity of our readers to help us fill that void and enable our journalists to continue delivering the news that you enjoy.

Unlike many other news sites, we don't have annoying pop ups or charge scandalous prices for events. We also produce printed magazines for each title and we make these freely available to read on line too, for your enjoyment. Often, people have asked why we don't make a charge for viewers to read these magazines and news stories but we feel that would adversely affect our readership/advertisers response rate. But with advertising revenues now severely affected we need your help. So, if you can support our news sites/magazines with either a small donation of even £1, or a subscription to our magazine, which costs just £27.55 per year, (inc p&P and mailed direct to your door) your generosity will help us weather the current storm and continue in our quest to deliver quality journalism.

We value your readership and your support, as this enables us to continue to provide our regular daily news updates. We've been established over 30 years, during which we've lost count of the numerous recessions and financial meltdowns, and we intend to weather the storms caused by Covid-19. So, every reader contribution, however big or small, is invaluable in helping us to get through this. Please click here to help support your favourite news site/magazine.
Previous articleSouth Kesteven visitor economy gets boost
Next articleGrant to transform Cleethorpes North Prom with lights, art & giant palm tree
Advertisment

An up and coming young designer from the University of Lincoln has produced an innovative new facemask to protect children from harmful pollution. Owen Phillips,...
Read more

North Lincolnshire and North East Lincolnshire Councils have strengthened their historic ties across the county by committing to sole membership of the Greater Lincolnshire...
Read more