In April 2018 Scarlet Black Occleshaw began giving out Boobie Bears to raise awareness for breast cancer. We spoke to Scarlet last year to learn more about her work and how her bears have travelled far and wide – from Australia to Vietnam. Since then they have been introduced to numerous celebrities who have been happy to get involved with the cause and to be snapped with the bears at various occasions!

What are Boobie Bears?

Boobie Bears are travelling cuddly toys that Scarlet hands out to friends, family, colleagues, and whoever else wants them. She also places them out in public spaces like shops, and they all come with a message of awareness and instructions. The bears’ journey always begins in Scarlet’s home in Winterton, Lincolnshire, from which they leave to meet new people and discover new locations. People pick up the bears and then drop them off in another location to be found. They pass from one person to the next with the temporary owner taking a picture of the bear and posting it, along with information of when and where the bear was found, to https://en-gb.facebook.com/boobiebears/

Scarlet keeps up with every bear on her Facebook page – each has its own album and if you have had a bear you can search its name to see where else it has been, to track its journey.

The Boobie Bears idea began with a desire to raise awareness and to turn her own negative into a positive when Scarlet found out, in February 2018, that she had Paget’s disease of the nipple. The rare condition, associated with breast cancer, does not show up on a mammogram or ultrasound, and causes eczema-like changes to the nipple and areola. It usually acts as a sign of breast cancer in the tissue behind the nipple. Scarlet had a nipple and breast tissue removed, underwent reconstructive surgery, three weeks of daily radiotherapy, and has thankfully had the all clear!

Since beginning the Boobie Bear project, Scarlet has sent out 2000 bears, and as we spoke with her for this article, she was in the midst of labelling up 150 more! Each bear is kindly donated by people so that Scarlet can give them out for free – she has even been gifted over 270 bears by a charity shop in Scunthorpe called HELP the mental health charity. When beginning her Boobie Bear project, Scarlet decided that she wanted to raise awareness in a way that wouldn’t cost anyone anything. In our 2018 interview Scarlet said: “Everyone is asked left and right for financial donations, but that is not what this is about, it is not about raising money, it’s about awareness. All I ask is that if anyone can find any small bears, that they send them to me.”

A brush with fame

While the Boobie Bears have been traversing the globe, being found and left in numerous countries, they have also become rather famous, running into a few celebrities. Most recently Scarlet was happily surprised when a bear called Ronette was greeted by 80s pop stars, including Jason Donovan and Tony Hadley.

On this Scarlet said: “I don’t know how he got the bear, but a man called Mark, who is a member of the Mobile Medical Cover Team, has one and takes it to the Lets Rock Retro Festivals which are thrown all around the country – there’s one every week through summer and each week different 80s pop stars turn up at the concert! Up to now Ronette the Boobie Bear has been to three of these concerts with the Mobile Medical Team. I don’t know how they manage to get the bear backstage and say, ‘will you have your photo taken with this bear?’ but it’s incredible!”

It is not only Ronette the bear that has had a brush with fame, however, as bears Margaret 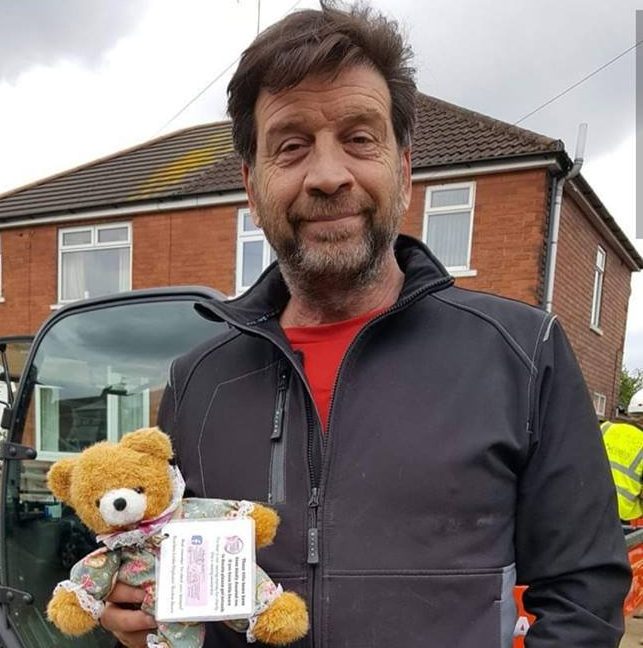 and Sissy met Nick Knowles of DIY SOS and the rest of the team. Scarlet detailed: “The DIY SOS team were in Scunthorpe at the time and I just put a shout out on Facebook. I asked if anyone out there had a Boobie Bear and would like to take it down to see if it can get its picture taken with Nick and two people managed it with Margaret and Sissy!”

Additionally a bear, aptly named Eddie, has met Eddie the Eagle, a bear has met three of the Strictly Come Dancing girls, Jim Broadbent has met Daphne, and Scarlet even had the opportunity to introduce Fleur the bear to some of the actors from Harry Potter at a convention where she had VIP access.

Scarlet says that she likes to keep her Boobie Bear page interesting. Outside of introducing them celebrities she noted: “I’ve started to give people challenges now. One guy took a teddy bear out to the Caribbean and it went on to the set of Death in Paradise in Guadeloupe. That bear was called Mooney after the detective. The bear was dressed as a police officer, photographed on the set and then was left there. Now, another person picked it up and he took it to Hawaii, and I got in contact with him and challenged him to find a Hawaiian police officer to have its photo taken with. He said, ‘you must be kidding’ but he managed it!”

In keeping things interesting with the bears Scarlet has also gone down the route of the Seven Wonders of the World. She noted: “It’s the little things like this that keep people interested. I’ve got the bears to four of the seven wonders like the Great Wall of China, and I have another bear that’s currently in Mexico, and a TUI rep is going to try and get it Chichen Itza, so they are now getting involved too to try and get these bears to every one of the Seven Wonders of the World.”

Scarlet added: “It’s just crazy what people are doing with them – its mad – they are managing to get them into the cockpits of planes with pilots, with captains of big ships, and one has just come off a steam train after being with the engine driver!”

Scarlet asks that if anyone has any small cuddly toys that they want to donate she would love to receive them. Or, if anyone would like to play along and take a bear to a new location themselves, they are more than welcome to collect one from her or, if they are able to pay for the postage, she can send 3, 4 or 5 in a packet to them.

Scarlet will also be at the Lincolnshire Show. While she is there to sing, she has assured us that she will be bringing her Boobie Bears along!

Make sure to visit the Boobie Bears Facebook page: https://en-gb.facebook.com/boobiebears/

Help us maintain our standards of journalism

Readers across the region enjoy our news site but keeping our news up to date and authoritative, without charging readers to view the site is a challenge. Especially now with the Corona Virus measures affecting us all, as many clients have been severely affected and are naturally reducing their spend on advertisements. Given this lack of revenue stream we are calling on the generosity of our readers to help us fill that void and enable our journalists to continue delivering the news that you enjoy.

Unlike many other news sites, we don't have annoying pop ups or charge scandalous prices for events. We also produce printed magazines for each title and we make these freely available to read on line too, for your enjoyment. Often, people have asked why we don't make a charge for viewers to read these magazines and news stories but we feel that would adversely affect our readership/advertisers response rate. But with advertising revenues now severely affected we need your help. So, if you can support our news sites/magazines with either a small donation of even £1, or a subscription to our magazine, which costs just £27.55 per year, (inc p&P and mailed direct to your door) your generosity will help us weather the current storm and continue in our quest to deliver quality journalism.

We value your readership and your support, as this enables us to continue to provide our regular daily news updates. We've been established over 30 years, during which we've lost count of the numerous recessions and financial meltdowns, and we intend to weather the storms caused by Covid-19. So, every reader contribution, however big or small, is invaluable in helping us to get through this. Please click here to help support your favourite news site/magazine.
Previous articleUniversity of Lincoln in top 20 in The Guardian University Guide 2020
Next articleDonation boosts Caistor Arts and Heritage charity
Advertisment

An up and coming young designer from the University of Lincoln has produced an innovative new facemask to protect children from harmful pollution. Owen Phillips,...
Read more

North Lincolnshire and North East Lincolnshire Councils have strengthened their historic ties across the county by committing to sole membership of the Greater Lincolnshire...
Read more